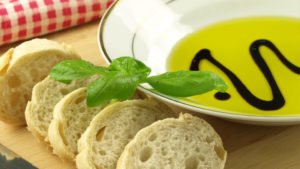 There’s a reason the Mediterranean diet has survived the test of time. With origins in countries that border the Mediterranean Sea, it has sustained some of the world’s oldest civilizations – the Egyptians, the Greeks, the Romans. It relies heavily on vegetables and fruits, olive oil, and the moderate consumption of protein. It is not only affordable, but it is also considered to be integral to a healthy lifestyle.

According to the Mayo Clinic, the Mediterranean diet emphasizes:

HEALTHY HEARTS
As the Mayo Clinic states, “Research has shown that the traditional Mediterranean diet reduces the risk of heart disease.” We expound on this

topic in The Olive Oil Source’s Heart Disease and olive oil article, which notes that, “…olive oil offers protection against heart disease by controlling LDL [“bad”] cholesterol levels while raising HDL [“good”] cholesterol levels.” Olive oil’s unique role in improving HDL atheroprotective functions in humans is outlined in a February 2017 study published in the American Heart Association’s journal Circulation. In a Time Health article, lead scientist Dr. Montserrat Fito stated, “Our hypothesis is that all the antioxidant compounds in olive oil bind to the HDL particle and preserves [it] from oxidative stress. And that maintains the HDL in better quality.”
DEALING WITH DIABETES
Speaking of heart health, according to the American Diabetes Association, heart disease is, “…one of the most common complications of diabetes—having diabetes doubles your risk for heart attack or stroke.” Fortunately, there are considerable similarities between eating a diabetes-healthy diet and a heart-healthy diet such as the Mediterranean diet. Olive oil is emphasized in both, but special attention must be paid to carbohydrate intake. In addition, a recent study showed for the first time, “…that the type of fat eaten significantly affects blood glucose levels after a high-GI meal in patients with type 1 diabetes. Avoiding foods rich in butter and using extra-virgin olive oil could help improve your postprandial (after-a-meal) blood glucose levels.”
WRESTING WITH RHEUMATOID ARTHRITIS
Perhaps the Mediterranean diet was one a secret weapon for the Greek and Roman armies. More and more studies are revealing that the anti-inflammatory qualities of olive oil can aid in reducing and/or preventing inflammation. After a hard day of battle, it’s conceivable that bread dipped in fresh pressed extra virgin olive oil reduced the aches and pains of tired soldiers. Oleocanthal, found in olive oil, is one of the compounds responsible for olive oil’s anti-inflammatory characteristics. In addition, a recent study in Japan indicated that, “Monounsaturated fatty acids might be key factors in the Mediterranean diet that suppress rheumatoid arthritis disease activity. “
COMBATING CANCER
Similar to heart disease and arthritis, on-going research is demonstrating further positive health links between olive oil, a key component in the Mediterranean diet, and cancer prevention and/or treatment. Dr. Gracian Michlewski, who played a key role in a University of Edinburgh study noted that, “While we cannot yet say that olive oil in the diet helps prevent brain cancer, our findings do suggest that oleic acid can support the production of tumour-suppressing molecules in cells grown in the lab.” Olive oil has been studied with positive results in association with fighting or the prevention of breast, colon, ovarian, prostate, and skin cancer as well. We address each of these topics in The Olive Oil Source’s Cancer and olive oil article.

A TABLESPOON A DAY KEEPS THE DEMENTIA AWAY?
New research is revealing a link between extra virgin olive oil (EVOO) and the prevention or delaying of the onset of dementia and Alzheimer’s disease. According to a recent study on mice, senior investigator Dr. Domenico Practicó, Professor in the Departments of Pharmacology and Microbiology and the Center for Translational Medicine at Temple University’s Lewis Katz School of Medicine stated, “The thinking is that extra-virgin olive oil is better than fruits and vegetables alone, and as a monounsaturated vegetable fat it is healthier than saturated animal fats.”

“Thanks to the autophagy activation [associated with use of extra virgin olive oil], memory and synaptic integrity were preserved, and the pathological effects in animals otherwise destined to develop Alzheimer’s disease were significantly reduced. This is a very important discovery, since we suspect that a reduction in autophagy marks the beginning of Alzheimer’s disease.”

This association is further supported by the recent work of researchers from the University of Louisiana at Monroe, who concluded that “…oleocanthal [a phenolic secoiridoid component of EVOO] demonstrated an anti-inflammatory effect by reducing astrocytes activation and IL-1β brain levels, which emphasize the importance of considering EVOO and oleocanthal as a potential therapeutic interventions in AD [Alzheimer’s disease].”

CONCLUSION: THE KISS* METHOD
It seems that all too often, despite our extraordinary advances in science, we find ourselves realizing that some of the oldest, simplest practices of our ancestors are the key to leading happy, healthy, and fulfilled lives. The Mediterranean diet is a perfect example of just that. Gathering around a table with family and friends to enjoy the day’s fresh catch with some garden vegetables, whole grain bread dipped in olive oil, along with a glass of red wine isn’t too complicated. Throw in a nice evening walk after dinner, and you’ve gone a long way to improving your health, without special supplements or suspect powders.